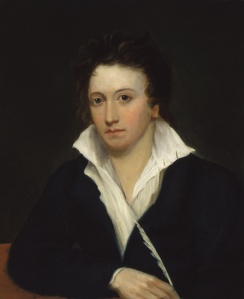 Vegetarian or vegan statements in literature are rare, just as they are rare in everyday life (which does not include Facebook where like-minded people seek each other out). Reading literature frequently serves up one dead animal after the other, akin to the quotidian reality of driving down the road and passing the meat truck and turning on the radio to hear that politicians are cramming down dead pigs in Iowa. Case in point is All Quiet on The Western Front, where hardly a page goes by without canned meat, a dead fowl, some occasion to find and kill an animal as if vegetables and grains do not exist. Maybe there is a thematic link between the ubiquity of animal slaughter and the horrors of WWI, as the novel depicts to the veganistically aware reader the notion that one insensate carnage deserves the other.

How thrilling then to meet the anti-speciesist philosophy of Percy Bysshe Shelley inhabiting the lines of his lofty poetry. Over two hundred years before Peter Singer helped us out by clarifying speciesism, Shelley had the concept down pat: he saw all animals (humans included in that category) as kindred and abhorred the cruelty of raising animals for slaughter whether in the name of religion, sport, or food. He gave up meat, as did Mary Shelley, his second wife. Mary Shelley, by the way, created one of the most famous characters in literature, the creature in Frankenstein, who is a vegetarian; existing in a natural and childlike state, he is innately good and therefore does not eat animals. He only turns to vengeful acts after suffering cruelty and isolation.

In Shelley’s philosophical poem “Queen Mab,” a fairy leads a spirit on a tour of humanity — past, present, and future. (I wonder if Dickens got the idea of his various ghosts taking Scrooge on tours from this poem.) The future constitutes his utopia of which one feature is that animals are no longer subjected to the cruelty of Man.

“. . .no longer now
He slays the lamb that looks him in the face,
And horribly devours his mangled flesh,
Which still avenging nature’s broken law,
Kindled all putrid humours in his frame,
All evil passions, and all vain belief,
Hatred, despair, and loathing in his mind,
The germs of misery, death, disease, and crime.”

Also, in “Alastor,” the narrator/poet avows that he has not injured any “bright bird, insect, or gentle beast . . .but still loved and cherished these my kindred.”

Aside from the feeling of serendipity that discovering such lines brings, can any importance attach to the fact that one or two random literary geniuses from the past share in my beliefs? Shelly’s veganism has importance to some degree as inspiration for others, those English majors who take a course in Romantic poetry and pay attention to what Shelley says. For me personally, Shelley’s magnanimity of spirit endears him to me, attracting me even more to his work. However, just as I have to associate with nonvegans in daily life, I still must and will read non vegan writers and will still revere my household gods, Emily Bronte and John Keats, who were not vegan. (By the way, I do believe that Emily Bronte would have been if circumstances had been different.)

Beyond serving as possible inspiration to the select few and a kindred link to my world, his conviction against cruelty to nonhuman animals illustrates what I, as a Stoic, value most among Stoic ideals: self-sufficient thinking and the application of reason. How odd he was at the time, not eating meat (and not believing in god, an avowed atheist). He knew of Pythagoras as a vegetarian forerunner, but his decision to quit meat made him a renegade and activist facing a culture notable for an extremely callous attitude toward nonhuman animals, fueled by a religion that insisted that Man, of all the species, was the only to have the all-important soul. He arrived at his principles through the exercise of his own reason and he had no qualms about living in accordance with his principles.  Although I might value my own independent judgment and don’t need Shelley’s example to endorse what I know is right, I suppose there is nothing wrong in harboring a hero or two and feeling slightly smug that I am in good company.

It is impossible to know whether Emily Brontë’s inspiration to write poems about natural subjects came more from the Romantic poets or from her own life. There is no hard and fast evidence about which poets she read, but it is most probable that she did read the most notable Romantic poets: Robert Southey and George Gordon Lord Byron as well as Wordsworth and Keats. (Undoubtedly she also read Shakespeare, Milton, and probably the Latin poets.) Her own reading aside, Bronte hardly needed the suggestion that poetry lay in nature because she lived very much in the natural world.

The image of Emily Brontë roaming the moors is one mythic element about her that is true. Today a visitor to the Brontë Parsonage can literally walk in her path and rest upon a boulder by a stream that she is reliably known to have frequented. From very young childhood, walking on the moors was a prime leisure activity for the Brontës, and throughout her life, being on the moors meant more to Emily than to any of the rest of the family. Going for a walk of several miles over a wild landscape originated with Mr. Brontë, who was a great walker. Walking was a good method for her communing with nature. Close to the ground and at the relatively slow pace afforded by only two legs, walking gave her the opportunity to explore the flora and fauna that would be missed on horseback or carriage rides. Emily might have enjoyed a ride on horseback over the moors, however. In Wuthering Heights, she has the young Catherine galloping across the moors on her pony, Minnie. Horses were a large expense and beyond the means of Mr. Brontë, so walking was the normal method of transportation. A walk of many miles was not a daunting proposition for Brontёs. Again Wuthering Heights provides illustrations: Mr. Earnshaw has walked forty miles from Liverpool at the beginning of the story, carrying the little child Heathcliff, and Lockwood and Nelly Dean think little of traversing the six miles to take them to Wuthering Heights and back to Thrushcross Grange.

In addition to living close to the land, Brontë  marked the seasons. The importance of the change of seasons cannot be overlooked for her, or for any nineteenth-century denizen of the north of England, although her poetic sensibility no doubt heightened the impact for her. Without electricity or heat, the arrival of winter could certainly be considered a grim event, and hence the association so frequently of winter with death, sadness, and hardship. The seasons appear repeatedly in Bronte’s poems, not as filler, but with true meaning—a June day recalled in a poem really was the description of a glorious event that would make one think of heaven.

She also was particularly impressed by the wind—another common feature of life in Haworth. Wuthering Heights, as Lockwood tells us, is a name signifying the strong winds that race down the hillside and assault the house, causing the trees to slant one way “as if craving alms from the sun.” In several poems, Brontë ascribes to the wind a seductive power to charm one away from dreary thoughts.

Emily Bronte for most of her life slept in a very small room that had been formed out of another room, and her bed was situated under a window with a view of the sky unobstructed by trees. I can imagine that she made good use of it to observe the moon and stars, as she frequently depicts them and the effect they have to engender a feeling of another world beyond the mundane.

Aside from leading to near mystical experiences, the sky was a joy to her, if we can take her poetry as an indication, which I think we can. In a poem (which appears in the chapter on “Love and Friendship”) a voice reflects: “I gazed upon the cloudless moon / And loved her all the night / Till morning came and radiant noon / Then I forgot her light– // No, not forgot—eternally / Remains its memory dear; /But could the day seem dark to me / Because the night was fair?” Yet, surprisingly, in another poem (appearing in this chapter) night is preferable to a sunny day. The references to the moon and the sun raise the opportunity to point out a feature of her poetry that adds to its durability and attests to Brontë’s originality. The tendency to slip into allusions to mythology–Diana and Phoebus for the moon and the sun—might have taken hold of her. It was very common in the poetry of a close predecessor, John Keats. References to mythology were still current. For example, Charlotte Brontë edited a poem of Emily’s after her death to change the description of a willow’s branches from “gleaming hair” to “dryad hair,” a dryad being a mythological tree nymph. A small example, but it serves to show how Emily, free of a poetic convention of the time, was effective as a poet. She describes the tree as it looked in nature; Charlotte simply made an allusion. Indeed, if you see a willow tree in the sun, you can observe that the long weedy branches do look like hair and they do gleam.

Overall, nature plays a large and varied role in the poetry of Emily Brontë. Very often, a natural scene, complete with the description of a season, atmospheric conditions, and vegetation comprises the opening stanzas of a poem, but the main theme is not about nature per se. That approach figures so frequently that the first few lines often give no indication of the topic of the poem. (As with Shakespearean sonnets, the ultimate meaning of the poem frequently appears at the end.) For example, there are poems in which the description of a natural scene shifts to a different main topic, such as how things have changed from an earlier time when nature so appeared; or how the spectacle of nature triggers the imagination to envision a world without suffering or a happy eternity. Therefore, despite the large presence of a natural description, such poems would appear under topical headings of “Mutability,” “Spirituality and Eternity,” “Imagination,” or “Death.” (Likewise, poems in those four categories have shared thematic strains.) In addition to making use of the natural world as a setting for a poem, Brontë uses nature as point of comparison or contrast to the human condition. For example, nature reflects the mutability of life and brings harbingers of mortality with the prospect and arrival of winter. In other poems, the beauty of the natural world contrasts with a situation of sadness, which serves to deepen the pathos. Foremost in her thematic depcition of nature, Brontë presents the idea that nature has the power to console.